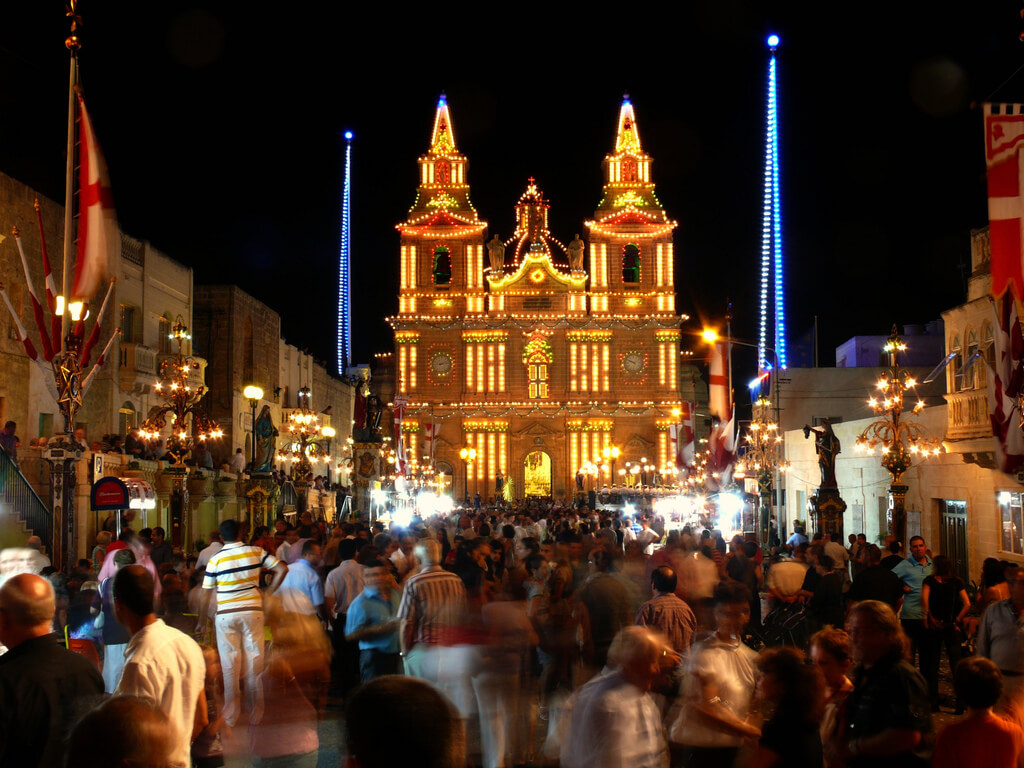 The summer season is the ‘festa’ season in Malta. If you visit Malta during the months of July and August you will definitely see plenty of fireworks to celebrate the feast of one of the many village patron saints.

The feast of Santa Maria

The largest and most popular feast is the feast of the Assumption of St. Mary celebrated on the 15th of August in 7 different localities.

Historically this feast is especially special to the Maltese as it also coincided  the day when Malta was saved from the World War II shortage of supplies which it desperately needed.  All merchant ships that tried to reach Malta previously had been bombed but when on the 15th of August a convoy managed to make it through the Maltese saw this as an answer to their prayers and named the convoy The Santa Maria convoy after the patron saint of the day making this feast day even more loved.

Some other festa dates

good one to go to.

The Festa generally takes place on the week-end closest to the feast day with a run up of fireworks and other events starting from the Thursday.

What is a village Festa

As a general rule, the streets of the town are decorated with lights, flags, banners and statues from a week or more before the feast takes place. Various stalls selling traditional nougat, candy floss, and all sorts of fast food are set up around the main street of the town.

On the Saturday night, the band marches of the various band clubs in the town parade around the town playing their joyful tunes around the streets. Children can very often be seen throwing confetti from balconies as the band goes past. Very late in the evening at around 11 or 11.30pm a display of ground fireworks standing on poles takes place. These ground fireworks have various moving parts which twirl around changing colour while making a hissing sound and most finalising in a loud bang!

On the Sunday evening the Statue of the patron saint is paraded around the streets accompanied by the band. Fireworks in the sky are heard throughout the evening but just before the statue re-enters the church at the end of the procession a big amount of fireworks are set off. This is known as the “kaxxa infernali” or the infernal box when translated literally marking the ending of the evening’s activities.